Comedy/Criminal-Drama. The show (running 2006-2014) stars James Roday as Shawn Spencer, a young crime consultant for the Santa Barbara Police Department whose "heightened observational skills" and impressive detective instincts allow him to convince people that he solves cases with psychic abilities. In this episode, Shawn gets the information that Scott, the old boyfriend of Juliet - whom she was supposed to meet again - had been killed under mysterious circumstances. In digging deeper, Shawn and his partner accidentally discover that Scott is well and alive and in a witness-protection program, because he helped to bring mobster J. T. Waring into jail for murdering an US-Marshal. When Shawn speaks with Waring, the man denies the responsibility for the murder and asks Shawn for a deal. And investigating again the crime scene, Shawn discovers that something is wrong with the whole case... 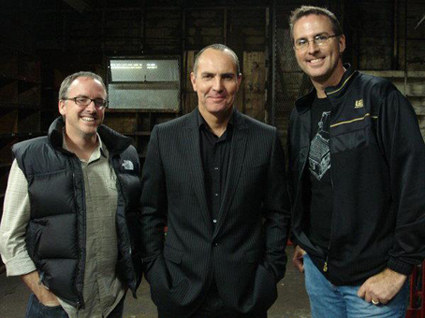 (Arnold with the creators of "Psych" -source: psych-facebook-page)

My fanfiction: "The Prisoner" and the continuation "Freedom"

Crime. In this episode of the NCIS-series, Mossad-director Eli David comes to Washington in order to take part in a conference. Members of a Palestinian Liberation group are out to finally kill him, and the Mossad agents have to join forces with the NCIS to protect the asset. However David's recklessness and arrogance make it even more dangerous to succeed.

My little fanfiction "The truth beneath the rose"

Crime. The series, running since 2005, features a forensic team under the leadershop of Temperance "Bones" Brennan and a FBI agent (Seeley Booth). In this episode, Heather Taffet aka "The Gravedigger" faces her final appeal before being sentenced to death. But before this can happen, she is killed by a professional sniper, and the team has to investigate the identity of the shooter.

The sniper hits again, this time a counterfeitor, and Booth sets on his tracks, determined to catch him, before he can take the next bad guy out. But Jacob Broadsky is clever and skilled.

FBI agent Booth and the team from the Jeffersonian are still on the hunt for Jacob Broadsky, who this time produces more collateral damage 'in the pursue of a greater good', amongst it, a member of the Jeffersonian. But Broadsky makes a mistake, what gives the FBI an advantage to succeed in bringing him down this time.

Crime/Drama. The series (running since2012) presents a contemporary update of Arthur Conan Doyle's character Sherlock Holmes - not in Britain, but set in the United States.

Crime/Drama. During a school trip, students of the Ballard High School, attended by the children of Washington, D.C. 's elite, including the President 's son, are the victim of an ambush. A national crisis begins and Secret Service agent Finley along with FBI agent Susie Dunn try the best to solve it plus calm the concerned parents of the children. With every day, the whole thing gets more mysterious in this big conspiracy and the motives of the enemy are nebulous at best.

Jakob Vries is the next parent assigned with a task from Gibson: this time: bringing pharmaceutical specialist Clarenbach to Gibson. However, Clarenbach is with Secret Service agent Finley, and he's not willing to give up the only chance to find out the whereabouts of the kidnapped children. 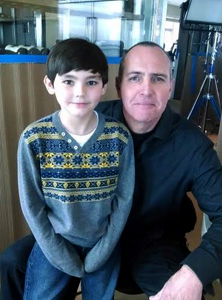 On the set with the boy who plays his son.

Crime/Fantasy. The series evolves around a modern day police detective, who also happens to be the descendant of a family of monster-hunters. It's exactly that business he and other initiates continue in Portland against the shapeshifters of the Wesen-Council. 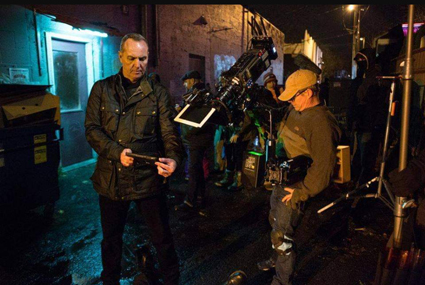 Crime. After Deon Meyer's novel "Dead before Dying". A team of two police officers (the white Mat, who has to deal with personal trauma, and the black Sanctus, who is trained by the F.B.I.) in South Africa have to solve a bizarre murder series, where the victims are found with paper masks of famous Americans on their head and have been killed with a hundred years old gun. 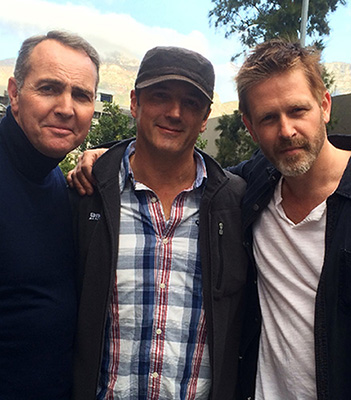 On the set with his Co-Star Trond Espen Sein, who plays Mat Joubert (right)

Crime. The series features the International Response Team of the FBI that investigates crimes involving American citizens outside the U.S.. In this episode, they fly to Johannesburg in order to find the truth behind the death of an American college student with South African roots, who is found killed in a bizarre ritual murder. As it turns out, the boy's father was a member of a special unit of the old Apartheid system, that staged a similar killing of a police woman in order to have justification to hunt down Anti-Apartheid activists.

(HAVE NOT SEEN IT YET)

Crime. The series is based on a book series and runs since 2014. It tells the story of the LA detective Harry Bosch, who is charged for the murder of a serial killer, while he still tries to find the responsibles for the murder of a young boy. Arnold plays an ex-colleague of Bosch, who now works as private security advisor.

It starts to get interesting as it becomes clear someone is framing Bosch. Also not to his advantage, his illegally set up camera surveillance is found an a colleage starts to spread rumors about his involvment in the murder of Gunn. The investigations concerning the murder of this veteran also take up speed.

Bosch gets the news he's one of the suspects in the Gunn-case and is angry at his partner for not telling him and secretely investigating him. Meanwhile Bosch discovers some shady things going in in that ex-military and now top-level-security-group the murdered veteran was a part of. However, his young informant, street kid Sharky, is murdered soon as well. In the Holland-case, they try to influence the witness.

The Gunn-case is reinvestigated, now to prove or unprove Bosch is framed for the murder. Holland's minions launch a social media bashing against Bosch. Meanwhile, Boschs own investigations concerning the killed veteran goes on and we are now definitely sure the ex-military and now top-level-security-group is involved in serious criminal business in Afghanistan.

Bosch gets into social media crossfire and the acting police comissioner is not very amused. Robertson follows the leads in the Gunn-murder case.

Bosch is interrogated by the DIA. Robertson fetches Rudy Taferos younger brother Jesse in the hope to get something compromising, but fails. Bosch's partner Edgar shoots ex-soldier Woodrow, one of the ex-military-gang in self defense.

Holland's lawyer tries to cut a deal, when decisive evidence is smuggled to the LA-times and from there reaches the police again and Jesse Tafero is arrested. LAPD investigates the ex-military-group and gets further evidence in the murder of Sharky. Edgar moves to a supposedly safe location and Bosch brings his daughter to his colleague, still fearing retaliation from the ex-Special Ops. Bosch tries to get rid of the compromising illegal camera surveillance evidence, however it is too late. Edgar is shot.

Ed is saved in the last moment. The police finally gets a hold on Holland and the remaining two ex-military turn against each other.

Crime. The series, running, since 2013 features an FBI profiler and her "helper", a mysterious criminal named Raymond Reddington who turned himself in. In this episode, we learn, that Reddington is not Reddington and the FBI tries to get a hold on the doctor who performed the imposter's surgery - who happens to be the girlfriend of Jankowics the drug dealer.

Actionthriller after Tom Clancy's novels about an CIA analyst. The second season takes place in Venezuela and evolves around upcoming presidential elections, political murder, missing people and terrorists. Actual president Reyes is involved in some sinister stuff and tries to win the people's hearts by blaming the Americans and especially the CIA for everything. Arnold plays an South African mercenary and arms dealer (you did not expext anything else, did you?)

Following the murder of the US-Senator and the discovery of what seems to be an illegal arms trading post on a satellite image, a little taskforce plus Ryan is send down the Orinoco to check things out. Meanwhile, the election campaign goes on.

Ryan teams up with Van der Byl's mercenaries to free the illegal prison camp and arrive just in time, before all prisoners are executed. President Reyes tries to forge the elections, by force and murder, if necessary.

Best quote: "You don't pay me enoug for walking in an ambush."

After the liberation of the prison camp, Ryan shoots some footage and shares it on the news platforms. The vids go viral and the people of Venezuela start rioting, just as Reyes celebrates his "victory" in the elections. Then the CIA taskforce liberates their captured boss Greer right out of the presidential palace with guns blazing - and democracy wins.

Best quote (Concerning more money): "What good is it, if you're too dead to spend it?"

This is the only time he shows up in this one: