Adventure-Fantasy, sequel to "The Mummy". Some cult followers and a corrupt curator raise the cursed Imhotep again to have him defeat the mythical Scorpion king's army and then conquer the world. Rick O'Connel, his wife Evie and the Medjai must save their kidnapped son and the world once again in Egypt.

Some pictures from the set (Source: Collector's Edition DVD #2):

Anti-Terror-Movie. An international anti-terror-unit tries to prevent the murder of an european head-of-government by an ex-yougoslavian killer organisation.

Crime Thriller. The US - customs uncovers a plot of Russian arms dealers who plan to smuggle dangerous nerve gas. In order to avoid publicity, the boss of the little customs station in Alaska decides, that the dangerous barrels should send to a safe compound with a regular train. Meanwhile, the responsible for the whole coup, the Russian top-terrorist Simeonov should be delivered via plane to Washington. But his comrades are already prepared for a hazardous rescue operation, and soon the young customs officer and the Russian agent sit alone in the snowy Alaska and have to think how to get Simeonov and the hijacked train under control again.

Best quote: "I'm popular today." (Simeonov, when he is surrounded by US Customs, FBI and Russian Secret Service who dispute about who will arrest him).

Historical. Some sort of female Robin-Hood-Story. Returned from the Crusade, a noble Lady has to rescue her son and her heritage from an evil usurper.

Actionthriller. A researcher who has just found an antidote against a deadly virus is kidnapped by terrorists in South Africa. The US-government sends a taskforce against them.

Sci-Fi-Thriller. Police officer Sullivan investigates a murder series taking place in fitness clubs. The killer displays odd habits and abilities and seems to be out for trophies. As Sullivan eventually captures a mysterious stranger who seems to be unvulnerable (except to electro shocks) and has no finger prints, the police relaxes, thinking the killer has been found. But the following night the massacre continues, and Sullivan gets help from the man he had previously arrested. Step by step Sullivan discovers, that he and the whole mankind are like animals in a reservation, studied by alien wardens, and that the killer is a sort of mad poacher. 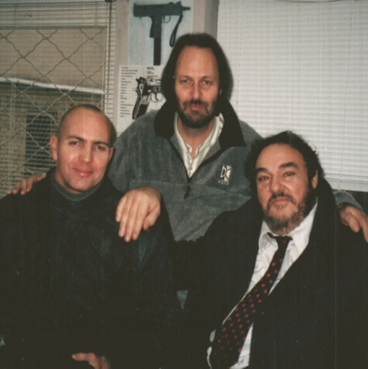 (Arnold, his co-star and the director)

Teenage Comedy. A junior (=teenage)-CIA-agent (played by Frankie Muniz) has to save the world from a criminal, who wants to destroy the world with nanotechnology.

Best quote: "You have messed up my haircut" (Molay to Cody in the last fight).

Anti-Terror-Movie. Another task for the international anti-terror-special unit, this time it is against plutonium smugglers, the Russian Mafia and politicians with a doubtful agenda who are threatening a European capital with a self-made nuke.

My little tribute to the movie:

Best quote: "They told me I would walk into crap; but not that I would swim in it" (Wolf after diving into the sewer for rescue).

On location in Munich.

Thriller. Some supposedly Arab/Muslim terrorists hijack an American nuclear facility and the FBI tries to prevent the worst case scenario. While panic is spreading in the population and the politicians prepare for 'counterattacks' on Arab countries, FBI-special agent Shea (played by Bruce Greenwood) discovers that nothing is as it seems, the supposed Al-Quaida-terrorists are in fact Ex-American elite soldiers who fought in Afghanistan, and their leader has a very special message for his country. However, a real terrorist is amongst them and the special force team making the final assault on the power plant proves no less dangerous.

Drama/Thriller. Ex-police officer Tertius Coetzee has been granted amnesty by the "Truth and Reconciliation Commission" in South Africa, but he searches for more than truth: forgiveness for the murder of an ANC-activist 10 years ago. However, the family of the victim has long ago shielded behind a mental blockade against these events and created a truth of its own. Only the sister of the murdered activist, Sannie, seems to open her mind - but only to hold Coetzee back in town for revenge. It takes a while until the members of the family discover the true extent and meaning of forgiveness (also for each other), its healing power, and till they find together at the grave of the assassinated. But the little bunch of revengers is still under way, and one of them cannot forgive himself.
This movie got several awards, including the "Human Rights Award".

International press articles and reviews about "Forgiveness" * About Arnold's preparation for the movie and the work on the set (Source: DVD, Special Features)

Actionthriller. Some criminals are on the run with a stolen dangerous virus on a pilgrimage train to Lourdes. A Monk and member of the 'secret service' of the Vatican tries to save the people and catch the criminals while time is running out.

Best quote: "If they want war, they'll get it" (Lennart decides to take the train hostage).

My Fanfiction "Behind the Fire"

I'm not sure about this - he is listed in the cast on some sites, and he is in the official trailer, but so far no one could detect him in the movie itself!

Actionthriller. Situated in the black gangsta-scene. Ex-con O2 (played by Tyrese Gibson) is suddenly plunged into a life-or-death situation; trying to go straight for the sake of his young son Junior, O2 is forced to go back outside the law when Junior is kidnapped in a carjacking. His son is now in the hands of a vicious criminal leader.

Drama/Thriller. In civil war shaken Sierra Leone, a mercenary and diamond smuggler (played by Leo DiCaprio) makes a deal with a fugitive from an illegal mine: help him find his war-scattered family for sharing the profit of a huge find. In order to get what he want, he tries to manipulate an American journalist in helping him with the search, however the journalist is after a big story that will change the world and manages to maneuver the smuggler in selling his partners in crime: the big bosses of the international diamond industry.

Thriller. Four not very experienced young robbers take refuge in a restaurant, when the police is on their tail. They try to take the people hostage, but soon find themselves hostages of two crazy killers who want the stolen money. The police surrounds the building, and very quickly the situation escalates. The local police is demissioned by a so-called ATF agent with very short temper, and the owner of the money involves the press. But nothing is as it seems first, and Detective Devlin discovers a conspiracy...

A few words about Arnold's part: 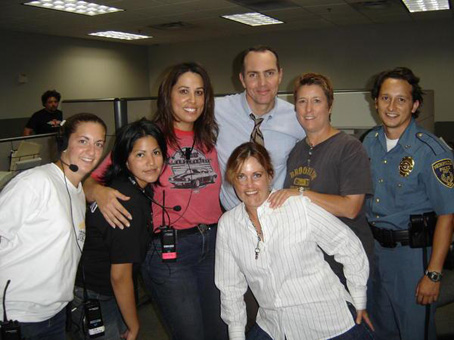 On the set with the film crew.

Thriller. Reporter Kovacs gets himself and his girlfriend into trouble while investigating the death of his brother and finds himself in an international conspiracy and corruption, circling around nearly perfect counterfeits.

Fantasy. The last - untold by Homer - adventure of the Greek hero Odysseus and his fight against the goddess of the underworld. Who ever wanted to know where the Vampires came from, here you'll get the answer.

My little tributes for the movie:

Fantasy. A brave knight and and princess fight searching means to destroy the dragons menacing their kingdom and the traitors behind them. 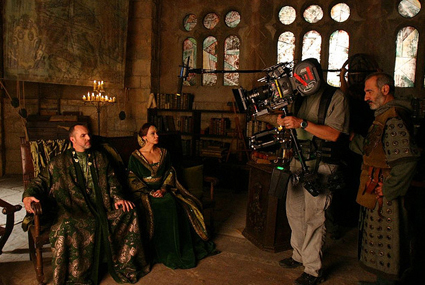 Fantasy/Adventure (after the "G.I. Joe"-Comics and Actionfigures). From the Egyptian desert to deep below the polar ice caps, the elite G.I. JOE team uses the latest in next-generation spy and military equipment to fight a corrupt arms dealer who wants plunge the world into chaos and then take control himself.

Best quote: "I control my own brain." (Zartan while crashing the mind-control chip before undergoing nanobot-transformatio).